Australia’s coast is the final resting place of over 11,000 shipwrecks – roughly one wreck for every three kilometres of coastline. And South Australia’s Admella and Degei are two of 14 wrecks whose stories will feature in the nationally touring panel exhibition Submerged – Stories of Australia’s Shipwrecks uncovering Australia’s rich shipwreck history.

Submerged is presented by the Australian National Maritime Museum and the Australian Maritime Museums Council and is the result of a national project with workshops held across the country to develop the exhibition and to source shipwreck stories. 68 shipwreck stories were nominated by 46 maritime museums and heritage institutions from around Australia with 14 of the most compelling stories selected to feature in the exhibition.

The exhibition is complemented by the Whyalla Maritime Museum’s own rich array of maritime artifacts and displays including items from the Governor Gawler that was wrecked off the Reevesby Island in Spencer Gulf in 1847.

Featuring in the Submerged exhibition is the SS Admella that was a passenger steamship named after its trading circuit – Adelaide, Melbourne and Launceston. It struck a submerged reef off Cape Banks, South Australia in 1859. 89 of the 113 passengers and crew on board lost their lives. Another vessel, Fijian built trawler Degei, was based in Port Lincoln and was heading out of Boston Bay when it struck rocks on Donington Reef, SA in 1974.

The pictorial exhibition also features wrecks of merchant vessels, steamers, schooners, whalers and a submarine. The oldest wreck featured is WA’s Batavia. Its 1629 loss on Beacon Island, and subsequent mutiny, is one of the most dramatic events in Dutch and Australian history.

Other wrecks include Sanyo Maru, a Japanese motor vessel lost in 1937 in Boucaut Bay NT, British merchant ship Sydney Cove lost in 1797 off Preservation Island, Tasmania and the paddle steamer Wagga Wagga which sank at Narrandera, NSW in 1913.

The exhibition also features one shipwreck from outside Australia – Australia’s second submarine HMAS AE2 which was lost in 1915 during the First World War in the Sea of Marmara, Turkey.

Submerged – Stories of Australia’s Shipwrecks is on a two year national tour across regional Australia. All 68 submitted shipwreck stories are available now on the AMMC website in a digital archive – www.maritimemuseumsaustralia.com/page/submissions-1. 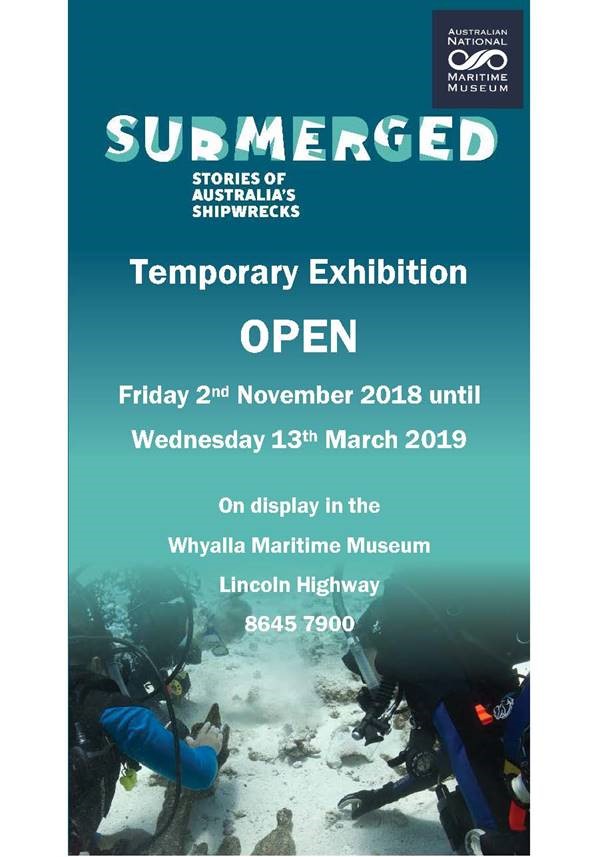