False Bay extends from the Whyalla Steelworks from the South to Black Point at the Eastern end. Some of the tidal sand and salt flats in the bay are up to 7 kilometres wide. Vehicle access to a sand beach is from Port Bonython Road onto Sida Cove and at Point Lowly; False Bay's beaches are not patrolled. False Bay is also a declared marine park for Giant Australian Cuttlefish - the largest known spawning aggregation of the Giant Australian Cuttlefish in the world. The best access to snorkel or dive to experience the Cuttlefish is at Stony Point and Black Point.

The Point Lowly beach is just a 20-minute drive from Whyalla (about 34kms) on a sealed road. It offers beautiful views of the gulf, coastline, and across to the Southern Flinders Ranges.

Dolphins and birdlife often frequent the waters, while the rocky shoreline is popular for fishing, sightseeing, or a relaxing and leisurely stroll.

Facilities include a breakwater and an all-weather concrete double boat ramp with a floating walkway between the ramps and solar lighting. Located near the boat ramp is a playground and toilet facilities – these include disabled access toilets and cold showers.

The Point Lowly Beach is a popular spot for a day’s outing - toilet facilities (including disabled toilets), and cold outside showers are located adjacent to the car parking area.

Swimmers need to be aware of strong currents and rip tides in this area.

The heritage listed Point Lowly Lighthouse and two lighthouse keepers’ cottages are the oldest buildings in the Whyalla area. Completed in 1883, the lighthouse eased the way for maritime traffic around Point Lowly. The original 15 metres tall tower was extended by eight metres in 1909. Manned for 90 years, the Point Lowly beacon became automated and was eventually delisted from the Australian Maritime Safety Authority register. Since 1995, the lighthouse has been owned by the City of Whyalla.

Tours do not operate over the Santos plant, but visitors can clearly see its size and complexity from the roadside and shoreline vantage points. An information bay is provided for visitors.

Liquid hydrocarbons - oil, condensate and LPG - are mixed at Moomba and pumped through a 659km underground pipeline to Port Bonython where the liquids are split into their various components by a distillation process.

Port Bonython commenced operation in 1984 and crude oil, napthas, propane and butane (LPG), are produced and held in storage tanks with capacities of 250,000 barrels, before being pumped along a 2.4km jetty to waiting tankers of up to 110,000 tonnes deadweight capacity. 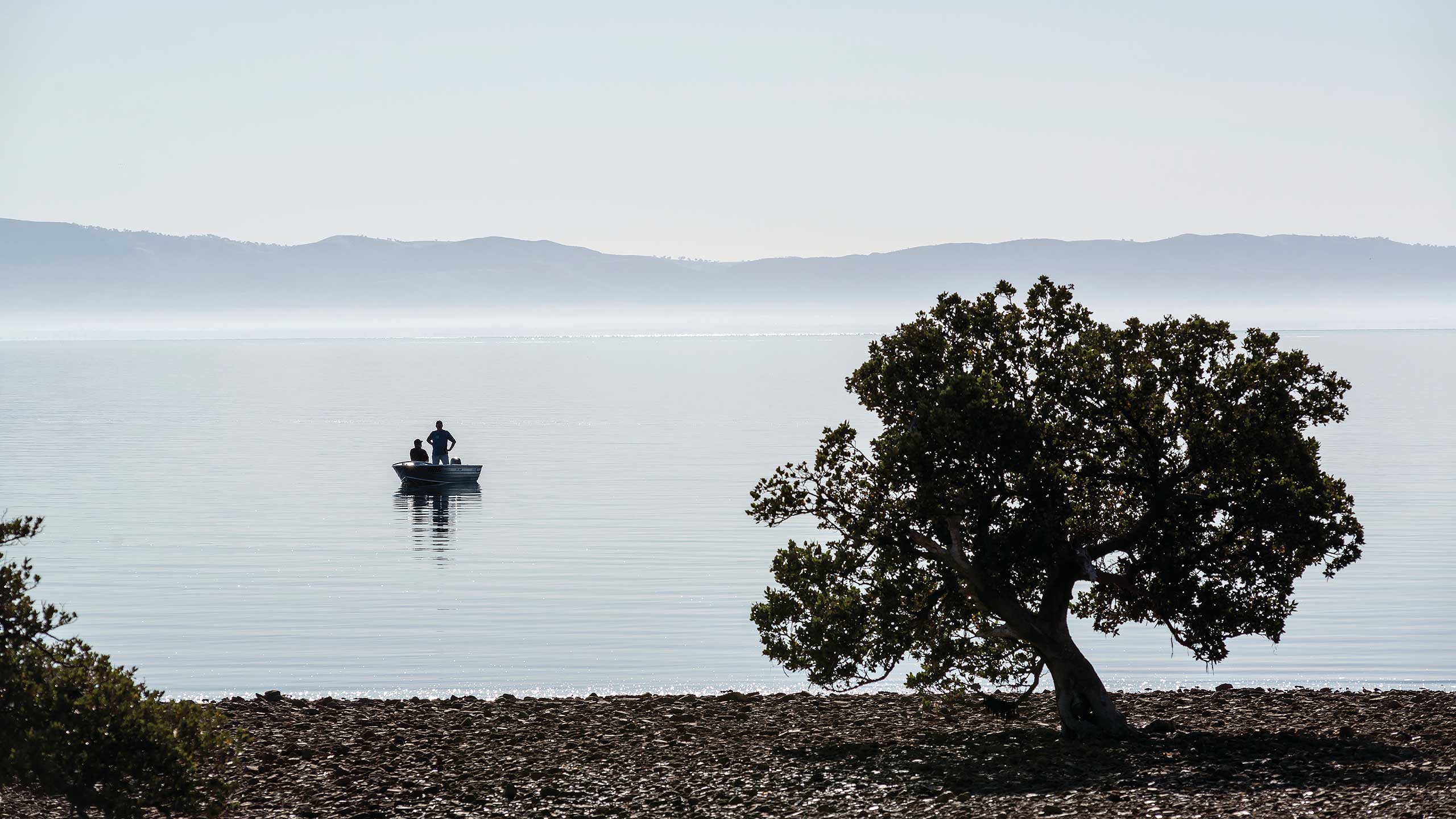 Approximately 20kms northeast of Whyalla, Fitzgerald Bay offers stunning views of the blue gulf waters framed by picturesque hills and Southern Flinders Ranges. Semi-desert vegetation reaches to the beaches that are mainly formed by pebbles, sand and a line of mangroves. The scenic drive extends approximately 20kms north to the uppermost holiday shack area of Douglas Point. The first section from the turn off to Fitzgerald Bay is a sealed road while the remainder is a gravel surface.

Fitzgerald Bay was home to a kingfish farm operator.  The sea cages are still visible from the shoreline. The Freycinet heritage trail starts here.

Bush camping is available at Fitzgerald Bay in three designated areas. Sixteen kilometres along the Point Lowly/Port Bonython road is the turn-off to Fitzgerald Bay. At the T junction where the sealed road becomes a dirt road, if you turn left and travel for approximately 1.8km you will come across the first bush camping area. This area is fairly basic and without any facilities. If you continue approximately 1.9km further you will come to the second bush camping area which has toilets and running water. Alternatively, if you turn right at the T junction and travel for approximately 3.7km it will take you to another basic camping area.

The Stranded Shingle Beach Ridges north along the western coastline of Upper Spencer Gulf have been provisionally entered for inclusion as a State Heritage Place in the South Australian Heritage Register. There are only 2 other places in the world registered with similar Shingle Ridges being in Egypt and Scotland.

A geological phenomenon, these stranded shingle beach deposits have been traced over a distance of some 50kms from near the head of Spencer Gulf southwards along its western shore to Stony Point, and provide a distinctive geological feature which is believed to date back to the Pleistocene period.

Most are usually narrow – no more than 10-15 metres wide. In some areas the deposits form cliffs behind the modern beach.

The movement of gravel by present day waves in the northern part of Spencer Gulf is restricted compared with that indicated by the ridges. It appears that the combination of a high sea level (3 metres higher than today), strong easterly winds, and high wave energy dissipation along the shore line, were responsible for the deposits.

Facilities include a Foreshore Centre with a café, change rooms and toilets, a lifesaving and rescue facility, extensive lawns, free electric BBQs and large popular playground area with shade-sail.

The beach offers swimming in relatively shallow waters, and there is also a swimming enclosure in the deeper waters of the marina.  A nearby fishing jetty is the ideal place to catch tommy ruff, garfish, squid and blue swimmer crabs and some species of whiting. At low tide you can walk out to the "blue line" in search of a feed of fresh crabs.

This beach was established in 1985 following a request from a local club for an area which would allow members to legally practice nude bathing.

Visitors are welcome to use the beach, but should note that it is an undeveloped section of coastline, does not have facilities, is not signposted, and may be difficult to locate. The road is also unsealed and not suitable for caravans or large vehicles. A ‘mud map’ of the area is available upon request from the Whyalla Visitor Centre and it is strongly advised to ring the Whyalla Nudist and Social Club prior to visiting Murrippi Beach.

Warning: It is recommended that 4WD’s are used and that the drivers have some vehicle recovery skills and 4WD experience.

Located: 12kms along Mullaquana Road from the intersection with Lincoln Highway.

Connecting with nature, catching a meal, relaxing or just for the thrill of it; Whyalla is renowned for great fishing in the bountiful Spencer Gulf waters of Eyre Peninsula. Eyre Peninsula is known as the Seafood Frontier of South Australia.

Whyalla provides enduring memories for visitors to the region delighting many with the surprising natural attributes and experiences on offer.

Whyalla is a pleasant drive amid rural South Australia; just over 4 hrs. from the capital city of Adelaide and just under 3 hrs. from Port Lincoln on the Eyre Peninsula.