Unearth the coastal and aquatic experiences in Whyalla.

Leave your life behind for a time. Let the spirit and wonders of the ocean and the land aMAZE and awe you.

The Whyalla landscape, coastline and aquatic environs are absolute in contrasts. Where the outback meets the sea, and industry cohabits with nature and vice versa in the most remarkable ways.

Historic dunes of shingle deposits over 7000 years old are framed by the back drop of the ancient Flinders Ranges across the Spencer Gulf waters at Fitzgerald Bay. Alongside you will find army exercise boundary lines providing unspoilt and sweeping views across outback and salt bush country. Tracks and trails get you to picturesque fishing spots and bush camps where you can unearth seas and skies of azure blue, and sunsets of blazing red and gold and dusky hues of mauve and pink.

Tens of thousands of the Australian Giant Cuttlefish reproduce around the underwater rocky ledges at Stony Point. Alongside you will find a refinery boundary where the cuttlefish aggregate offshore and are kept safe to breed with exclusion zones. Tracks and trails get you to rocky shoreline access points to snorkel or dive to witness this incredible spectacle unique to Whyalla. Further along at Point Lowly or False Bay encounter beaches and seemingly endless sandy bays.

Jetties create underwater marine habitats and places to fish from and marinas create interesting havens for resident dolphins to visit and play.

Whyalla is situated within the Western Myall plains of the north-east Eyre Peninsula. The land formation of the region includes a narrow continuous strip of salt marshes and sand dunes, often fringed with mangroves on the seaward side and large flat plains to the west bordered by the Middleback Ranges to the far west. The soils are typical of the semi-arid regions of Australia – thin red brown, alkaline sand and clay (Gawler Ranges Soil Conservation Board 1996 p36).

The fauna of the region is characteristic of the species found throughout the scrubs and woodlands of a semi-arid zone. Larger species include the Western Grey Kangaroo, and to a lesser extent the Euro (Common Wallaroo) and Red Kangaroo. Small carnivorous species still present are the Fat-tailed, Stripe-faced and Common Dunnart. Several species of Bat have also been observed. The region has a typical semi-arid collection of resident bird species. Water birds and migratory species also frequent the area. Over 80 species of birds have been recorded to date. Twenty-nine species of reptiles and amphibians have been identified in the Whyalla Conservation Park. Reptile species commonly found include the Bearded Dragon (Pogona vitticeps), Western Brown Snake (Pseudonaja nuchalis), Sleepy Lizard (Tiliqua rugosa), Gidgee Skink (Egernia stokesii) and the Striped Skink (Ctenotus robustus). Two frog species, the Spotted Grass Frog (Limnodynastes tasmaniensis) and a species of Neobatrachus have also been discovered. (Local Environment Plan Whyalla 2000)

The most significant public awareness of the Whyalla marine environment is the Australian Giant Cuttlefish (Sepia apama). A fisheries management program was established, which includes an exclusion zone in the main breeding area (False Bay – Pt Lowly). Research is continually being undertaken to learn more about this unique marine animal and it's mass aggregation in Whyalla waters. 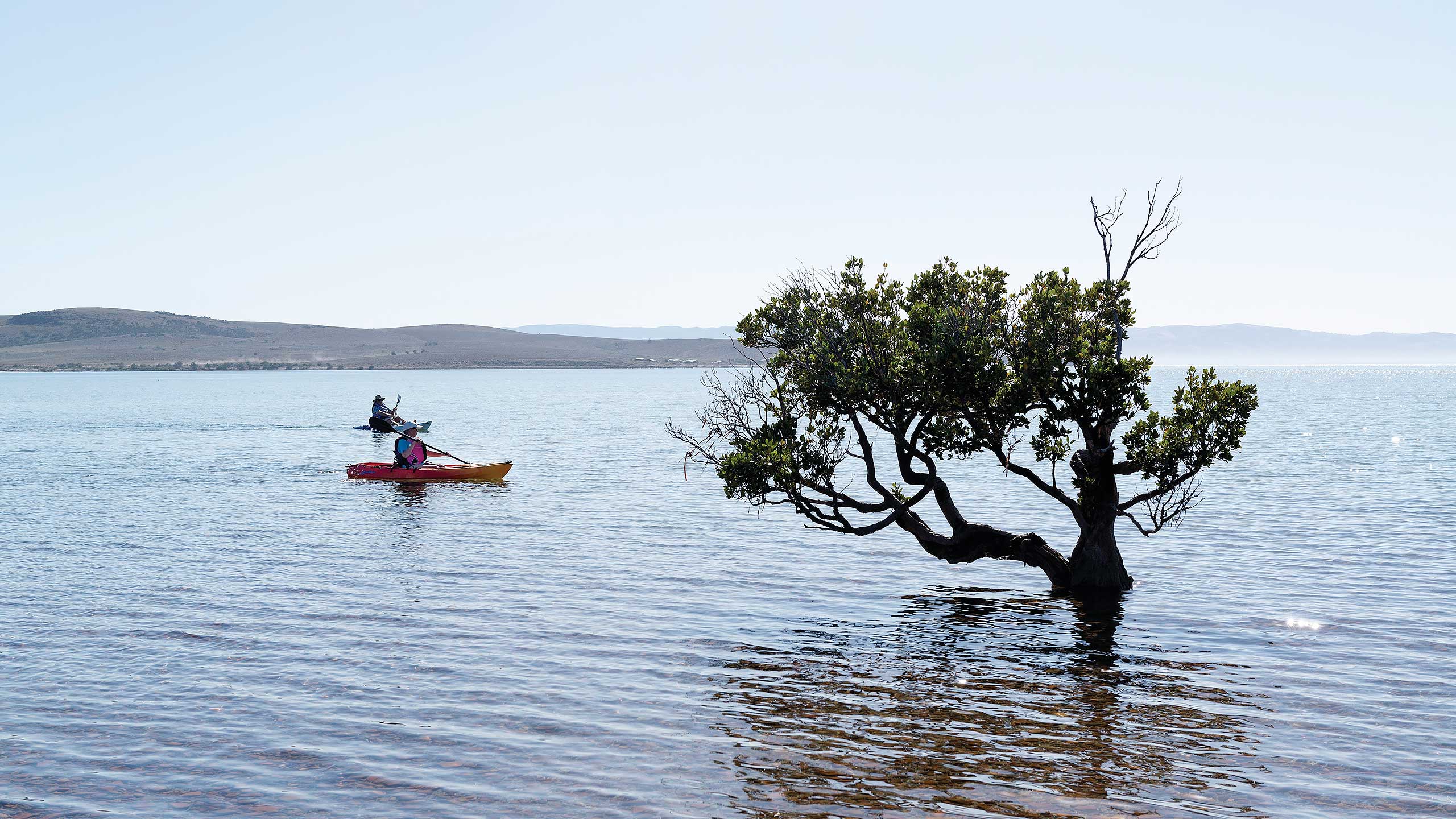 Connecting with nature, catching a meal, relaxing or just for the thrill of it; Whyalla is renowned for great fishing in the bountiful Spencer Gulf waters of Eyre Peninsula. Eyre Peninsula is known as the Seafood Frontier of South Australia.