Whyalla’s Neta Kranz Kindergarten now has an award-winning painting on its wall thanks to local dad Kane Selin. 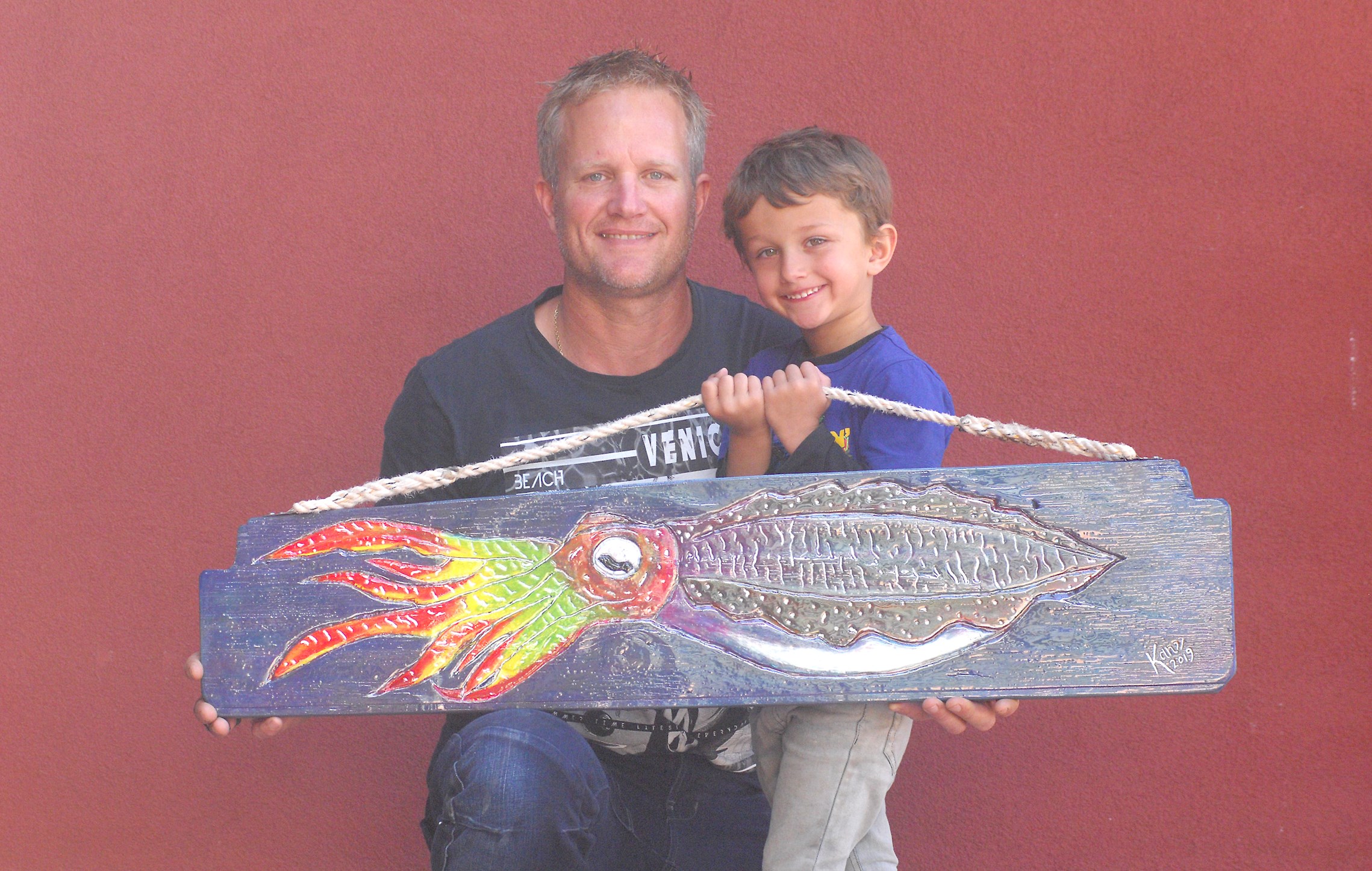 Hobby artist Kane was encouraged by the kindergarten to enter his unique cuttlefish artwork in the 2019 Cuttlefest Art Prize earlier this year. Kane had put his work together after gaining inspiration from a Natural Resources kindergarten day-trip to the beach with his four-year-old son Harley.

“Harley loves fishing and the sea so I went with him when Natural Resources had an excursion,” Kane said.

“We spent half the day picking up bits and pieces including cuttlefish bones.

“When I got home, I saw a bit of marine ply offcut from a floor renovation job I was doing on a tinny and thought I could see a cuttlefish eye in a knot in the wood.”

From that point it was a fantastic creative exercise as Kane combined multiple art forms, paints and finishers to create his amazing, colourful, cuttlefish creation.

“I just started engraving the cuttlefish into the wood then thought I’d try my hand in painting it and it went from there,” Kane said.

“I used a mixture of cheap spray packs, some candy pearl, household paint and even a liquid paper pen for the white lines in the cuttlefish.”

All of this was then finished off with a coating of liquid glass to create the 2019 Cuttlefest Art Prize winner.

“The staff at Neta Kranz encouraged me to enter the competition when I gave them the art,” Kane said.

“I was a bit surprised because I just did it for a bit of fun.”

Kane’s entry topped a big collection of entries that went on display at the Middleback Arts Centre during Cuttlefest. For his efforts, he scored a guided cuttlefish snorkel for two at next year’s Cuttlefest.

Cuttlefest happens between June and August every year with this year’s event attracting more than 2000 people for the Experiencing Marine Sanctuaries guided snorkels  and more than 3000 divers overall to see the unique cuttlefish aggregation off Stony Point.

Check out some of what happened during this years Cuttlefest season below:

CuttleFest 2019 is set to explode in a blaze of colour and activity with a program to match the magnificent giant cuttlefish that come to Whyalla’s waters every year.

Minister David Ridgway has kicked off this years CuttleFest

Whyalla offers a range of comfortable modern accommodation where you might stay a little longer than you planned. Whyalla features hotels, motels and four star apartments or cabins and caravan parks if sharing road-trip stories is more your style.

Apartments in Whyalla are a home away from home with serviced, well-appointed studio, one, two & three bedroom accommodation options available for both the corporate and leisure traveller.