CuttleFest runs to the end of August 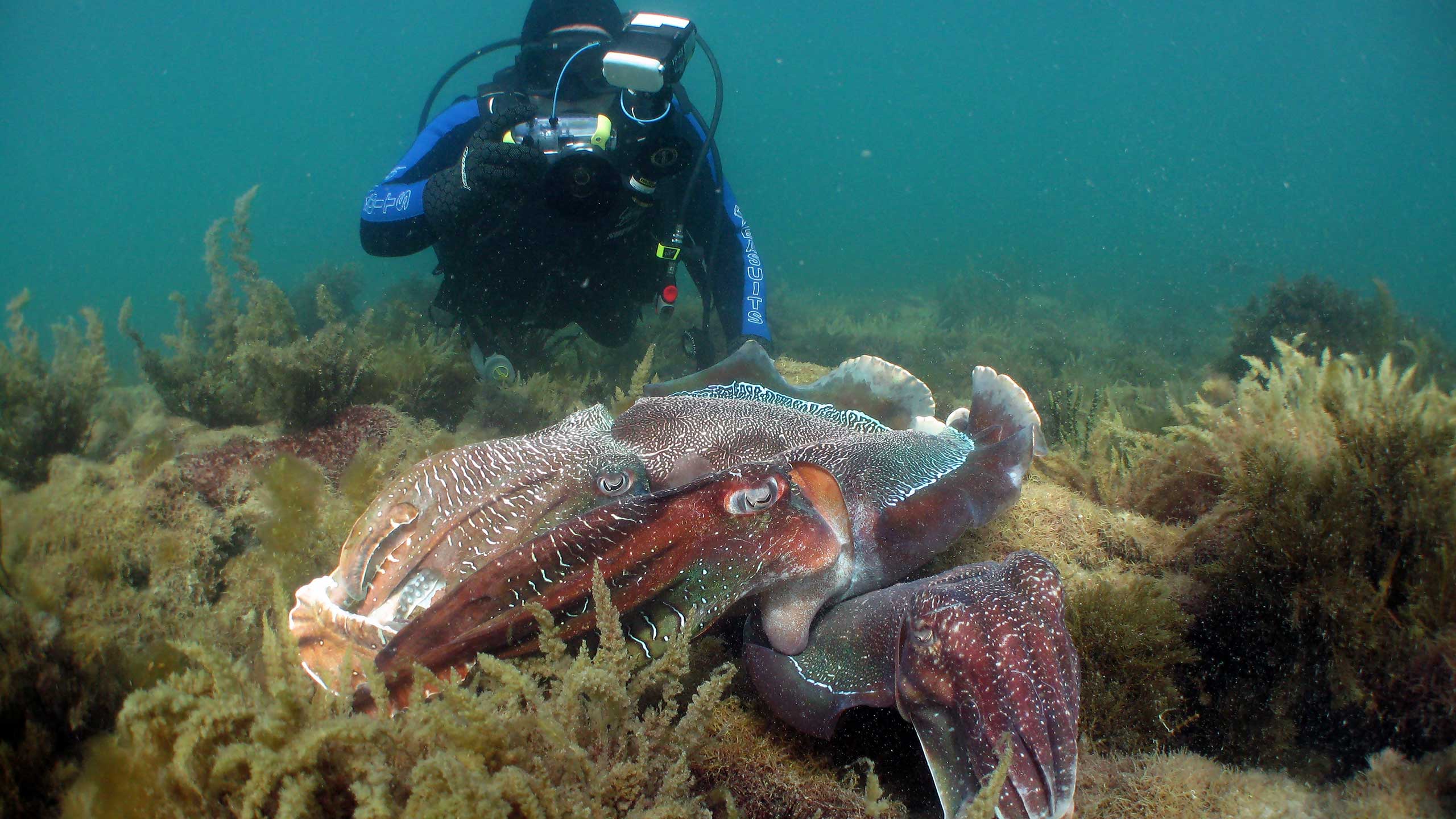 Check out the cuttlefish before they leave for the year!

CuttleFest is a great way to up close and personal with the cuttlefish!

NEED CONVINCING JUMPING IN THE WATER? CHECK OUT THIS STORY OF A GROUP OF FRIENDS TAKING THE PLUNGE

Last weekend I had a group of five friends from Adelaide come to Whyalla to see the Giant Australian Cuttlefish at Stony Point as part of CuttleFest 2019. Our group booked its wetsuits through Whyalla's Dive Shop to set up the experience of a lifetime.

Tony Bramley of Whyalla Diving Services, is a key contributor to CuttleFest as it supplies wetsuits throughout the three-month cuttlefish season for those that want to get out and experience this amazing phenomenon in their own time.

Just the experience of fitting the wetsuits was worth the money!

It was an hour of laughter and excitement as we all put on our wetsuit liner before squeezing into the very warm 7mm wetsuits complete with hoods, gloves, boots, snorkel and mask. 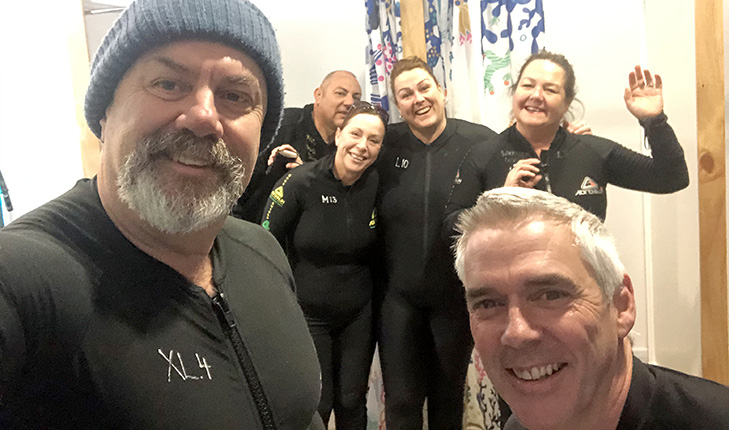 HALF THE FUN: Jon Ortlieb, Dave Viljoen, Alison Nicholls, Michelle Friel, Cindy McDougall and Andrew McDougall get fitted up for wetsuits at the Whyalla Dive Shop.

Forget your modesty here (unless you’re built like Chris Hemsworth or fitness guru Michelle Bridges) as we all jiggled and giggled in our suits - with the assistance of Tony’s wife and business partner Marlene along with Swannie, Paula and Nahuel - at the dive shop.

“We look like teletubbies” somebody quipped as we waddled back out to our cars for the short trip to Stony Point. The staff advise putting the suits on before going out to the site and the suits are yours for 48 hours (not that we wore them them for two days but it was tempting).

We scored a beautiful sunny, winter day with very little wind … almost the perfect conditions for a snorkel to see these amazing creatures that aggregate (gather to mate and lay eggs) at the only known place in the world … Stony Point just northeast of Whyalla.

There were plenty more teletubbies, and other more graceful seal-like wetsuit clad adventurers, when we got down to Stony Point. Experiences were shared with us by those coming out of the water including stories of amazement at the dolphins that had joined one group during their snorkel. 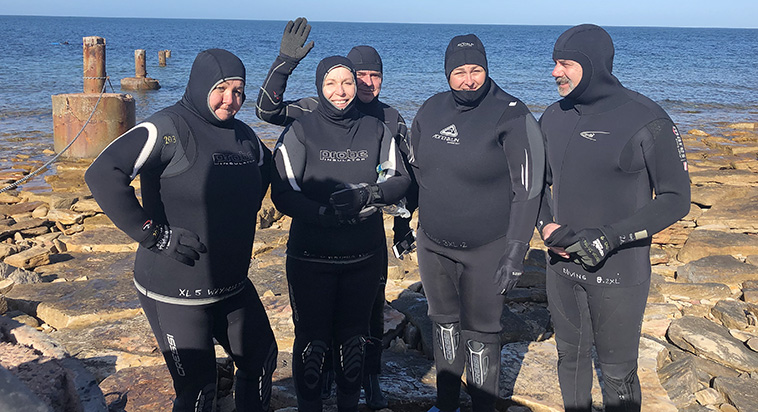 Anyone with concerns about the cold or about their ability to swim were soon dismissed as we hit the water. The 7mm wetsuits make you float and the only cold bit was your bottom lip on the snorkel.

What then opened up for our group, just metres off the shore and in five or six feet of water, was a wonder world of activity.

Not only were there hundreds of cuttlefish doing that they came here to do, there was big schools of nice-sized tommy ruff and some sightings of even bigger fish which looked suspiciously like tuna or yellowfin.

But the cuttlefish were amazing.

Changing colours, writhing in passionate embraces or just meandering along with lots of bumps and horns appearing and disappearing on their heads, it was a privilege to float above and watch the show.

At many areas there seemed to be cuttlefish parties as they congregated together in groups of six to ten, making for fascinating viewing.

Returning to shore after an hour (that just flew by) there were smiles, hugs and plenty of stories told in our group and with complete strangers who were now “best friends” after the shared experience.

After the scenic Cuttlefish Drive route back to Whyalla, the staff back at the dive shop were genuinely interested in our adventure as they got to work on cleaning our wetsuits for the next group or groups.

$75 for all this … that’s a bargain when you consider the outlay that would have been required if we didn’t hire the suits and have someone do all the fitting and cleaning for us. 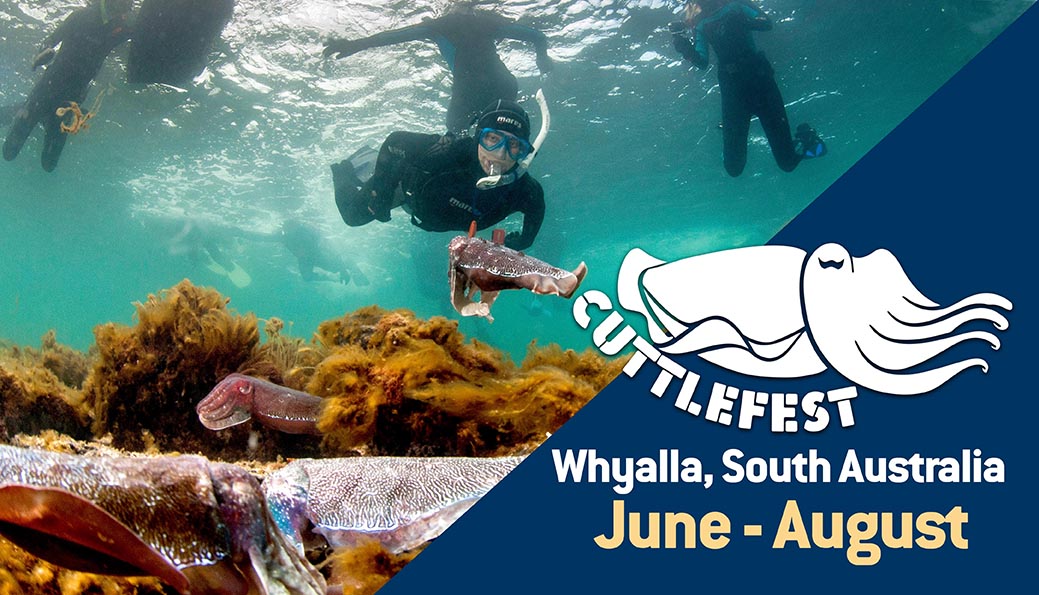 CuttleFest 2019 is still going strong and Tony Bramley says they cuttlefish will be around for another three to four weeks.

“Since a drastic drop in numbers in 2013 there has been a steady recovery with the implementation of the marine sanctuary,” Tony said.

“The collapse of numbers five years ago has no scientific explanation but I believe the recovery coincides with the full protection afforded this animal in all Upper Spencer Gulf since 2014.

“The last three years we’ve started to see numbers in excess of 200,000 again and hopefully growing.

“We are now getting 10,000 or more people coming to Whyalla to see these amazing creatures.

“It can only keep bringing more people to the area, allow more people to be educated on the environmental importance of this site and allow everyone to do their bit to protect and better understand these creatures.”

Whyalla Diving Services at 33B Playford Avenue, Whyalla, is open seven days a week during CuttleFest. Bookings for wetsuits & group tours can be made by calling Swanny on 0488 792 681 or Tony on 0438 458 080 or sending an email to whydive@ozemail.com.au

The cost for wetsuit hire is $75 which allows you to use the equipment for two full days. Included is a body liner, semi dry wetsuit, vest with hood, gloves, boots, fins, mask, snorkel, weight belt and tub to carry it all in.

The City of Whyalla is a proud supporter of CuttleFest and, in co-operation with Natural Resources Eyre Peninsula, has just completed a new changing room at Stony Point to complement the toilet block.

Find out more about this year's Cuttlefest in the tiles below, event program released soon:

is open to all residents of Whyalla and their families to create a cuttlefish or other local marine based artwork.

CuttleFest 2019 is set to explode in a blaze of colour and activity with a program to match the magnificent giant cuttlefish that come to Whyalla’s waters every year.

Whyalla has a lot to love and even more to Unearth. Marvel at the natural wonders, picturesque landscapes, amazing sunsets, thrilling adventures and one of a kind experiences.

Whyalla is famous for our captivating cuttlefish and dolphins, steelworks industry and nature based activities. Unearth natural wonders, experiences and landscapes.

Whyalla offers a range of comfortable modern accommodation where you might stay a little longer than you planned. Whyalla features hotels, motels and four star apartments or cabins and caravan parks if sharing road-trip stories is more your style.

Dreaming of an adventure? Planning an escape? Have a yearning to learn and explore? Love nature? Want a One of a Kind experience? Find it all by Unearthing Whyalla.

Looking to book to secure your accommodation or place on a tour? Whyalla has a lot to unearth and experience. Stay a spell, do it your way so you don’t miss a thing.

Visitors will be awed by the dramatic events and vivid colours and textures that shape Whyalla. Feel the heat and witness the spectacle of red hot coals emerging from the massive coke ovens at the Whyalla steelworks when learning about the transformation of ore into steel; wonder at the antics of the local resident dolphins and feel the sand between your toes when searching for a delicious meal of fresh crab off the Whyalla Foreshore beach.

Dive or snorkel and witness the camouflage and colourful mating rituals of Whyalla’s distinctive Giant Cuttlefish. Relax within the ocean and wonders of the unique Northern Coastline and beaches on the tranquil Spencer Gulf which are back dropped by the ancient Southern Flinders Ranges. Spectacular sunsets and shimmering horizons, unrivalled natural events and industry that strengthens the nation await the adventurous ready to unearth our earth’s raw essence up close.

Are you coming to visit…..soon? If not watch this and then book your trip.